Shotgun Fungus is a Tough Foe for Pressure Washers 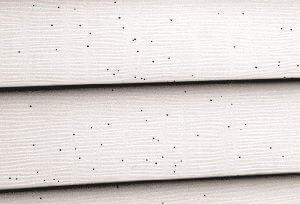 Complete Power Wash techs successfully clean the toughest elements that nature can bring to the exterior of a home. But Shotgun Fungus is the toughest.

Our pressure washing techs can clean nearly every tough stain found on a house, roof, deck, fence, etc… in the greater Hagerstown, MD area. One of the toughest are the little black dots, often found on vinyl siding. If you’ve seen these on your home, you likely tried scraping them off with a fingernail. And then tried scraping harder. And finally, just short of tearing off a nail, gave up in frustration. The best advice we give is to prevent the fungus from attaching and then spreading.

What Are These Black Dots?

“Shotgun” fungus (Sphaerobolus stellatus) — also know as Artillery Fungus — originates in the mulch often found in flower beds next to a home. Its name is derived from the Greek for “spear thrower,” as it indicates how the black spores are propelled from the ground to the home’s siding. The launch can spray up to 20 feet high. The spores are extremely adhesive and will stick to any surface. The spores aren’t harmful, but are extremely difficult to remove. The black dots resemble an artillery spray, or shotgun blast, hence the name.

It is a common misconception that more expensive mulch will be fungus free, or that cheap mulch is more prone to having the fungus in it. This is simply not true. Artillery fungus can infect any organic mulch, and under the right conditions it will flourish and create a pesky problem. Artillery fungus thrives in cool, moist, shady areas. If you have the telltale black dots on your home, you will notice that they are located above mulched areas where the fungus has shot their spores. In the Tri-state area on Maryland, Pennsylvania and West Virginia, the fungus is actively shooting spores for approximately 2 weeks each year. Until action is taken, the dots will accumulate, getting worse every year.

What Is The Solution For Artillery Fungus?

At this time, Complete Power Wash has no recommended solution for the removal of the fungus spores, however we can tell you how to stop them from getting worse. Unfortunately, pressure washing does not remove the spores. Some people have had luck using abrasive cleaning sponges and elbow grease. The first step is to remove the infected mulch by raking and disposing. The second step is to replace the organic mulch with an inorganic material like rubber mulch or stone. This is the only way to ensure that the mulch is completely removed. Some people have had success smothering the fungus with plastic, or adding more mulch to the old mulch. We do not recommend this, as it rarely works.

Inspection is Better than Cleaning

The obvious solution is found in the wise saying, “An ounce of prevention is worth a pound on cure.” If you must have mulch next to your house, routinely inspect the siding after putting down new mulch. As soon as you see the black dots, remove it immediately.

To schedule a FREE pressure washing estimate and appointment for the upcoming season, just click here. You can also call our Hagerstown, MD office at 301.842.2290.

To see a gallery of our pressure washing work in the Greater Hagerstown, MD area, click here.